Re:creation is a hobby gamedev project being made by Elias Daler. Re:creation is an action adventure game inspired by The Legend of Zelda: A Link to the Past and Earthbound.
You play as an undead knight who can become people he kills and get their abilities to progress in the game and solve various puzzles using unique recreation mechanic which can be summarized in this gif:

You play as undead knight who was betrayed and killed by the necromancer during the epic boss battle. When the unnamed hero is revived, lots of years have passed. The necromancer has become a lich and a king. He uses undeads as slaves and tries to show other people that undeads are stupid and evil.
The hero finds Undead City and explores society of undeads. He quickly realizes that undeads are not that evil at all. They’re just angry at people, because undeads are used for unpaid work, sword training (easy exp for human warriors!) and their treasures are frequently stolen. All they want is recognition and peace and the player must stop the evil necromancer king and show other people that undeads are not evil.

Example of a puzzle 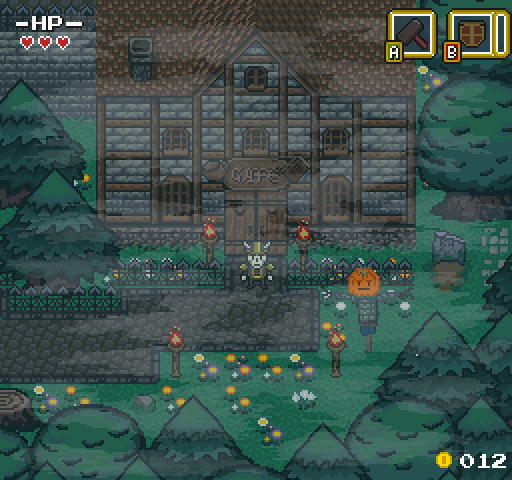 Hero reacts differently to items he gets from chests

Corpses have weight, so you can use them to press buttons to unlock the doors. (Normally you would use statues or boxes, but not in this case!)

Some info about the tools I use

I use C++ with SFML. Lua and LuaBridge are used for scripting.
I also use JsonCpp for JSON stuff and ImGui for GUI stuff.
The game engine is made by me. The game features lots of modding abilities (it’s almost entirely data-driven) and real time level editing.